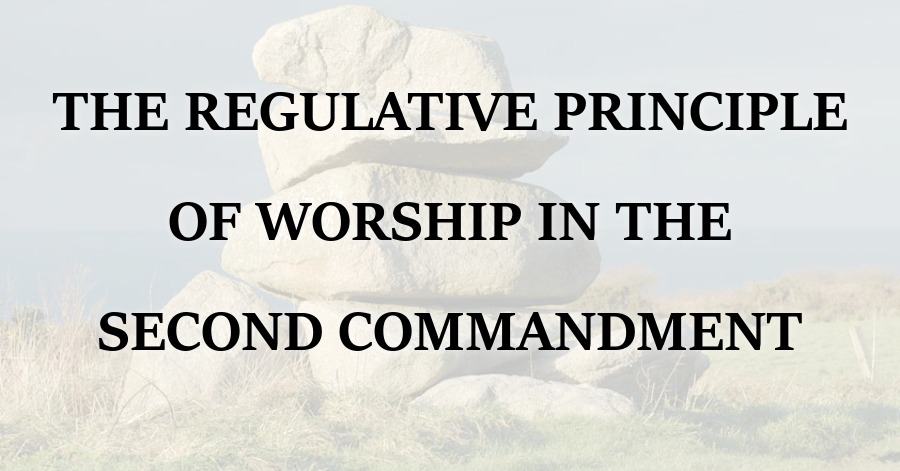 The second commandment is by far the most important scriptural passage dealing with worship. It teaches us that God alone determines what kind of worship is acceptable to Him and that He rejects all forms of idolatry irrespective of source or good intention on the part of the idolater. It also elevates the worship of God to a position of preeminent importance in the life of the church, second only to the acknowledgement of God as the one and only true God. The second commandment given to Moses on Mount Sinai reads:

“Thou shalt not make unto thee any graven image, or any likeness of any thing that is in heaven above, or that is in the earth beneath, or that is in the water under the earth. Thou shalt not bow down thyself to them, nor serve them: for I the Lord thy God am a jealous God, visiting the iniquity of the fathers upon the children unto the third and fourth generation of them that hate me; And shewing mercy unto thousands of them that love me, and keep my commandments” (Exodus 20:4-6).

When we read the Ten Commandments, we have to understand that they are a summary of the entire Moral Law expressed in terms of examples which illustrate the most grievous violations of that law. The Larger Catechism is correct in stating that when the Lord condemns one particular sin in the Ten Commandments, He is implicitly condemning all related sins and commanding the corresponding virtues (WLC 99). God knows that we learn best by example. So, for example, the ninth commandment, which forbids bearing false witness, implicitly forbids us from doing anything that “is prejudicial to truth, or injurious to our own or our neighbour’s good name” (WSC 78). It also requires the “maintaining of and promoting of truth between man and man, and of our own and our neighbor’s good name” (WSC 77). In a similar fashion, when our Standards describe the second commandment as forbidding “the worshiping of God by images, or any other way not appointed in His Word” (WSC 51), they go on to examine what is behind the commandment. When we read that God condemns idolatry in the second commandment, we have to ask ourselves what idolatry represents. Idolatry is simply one of the most egregious examples of unacceptable worship. The making of images for use in worship is the very epitome of what Paul calls “will-worship” (Col 2:22-23). It is the archetype of all man’s attempts to worship God through the work of his own hands. So in the second commandment, God forbids not only the making and worshiping of images, but any form of worship fashioned by the hands of men rather than by God. This is clear from the example God gives just a few verses later to make His intent clear and to show us how to interpret the second commandment. He says, “And if thou wilt make me an altar of stone, thou shalt not build it of hewn stone: for if thou lift up thy tool upon it, thou hast polluted it” (Ex. 20:25). God was teaching the Israelites by example that all their own efforts at improving on what God has commanded are in fact no different from the grosser forms of idolatry. All attempts at adorning the worship in order to make it more appealing to the human senses, whether carving an image outright or simply improving upon an altar, were forbidden. It might seem at first sight that there could not possibly be anything wrong with wanting an altar to look a little more presentable. What could possibly be wrong with that? The answer is that God is jealous for His own worship; He knows that in our fallen state we are incapable of not messing it up. That is why He has told us what He wants and why He forbids us from trying to improve upon the worship that He has given.

The connection between the second commandment and the Regulative Principle of Worship becomes even clearer when we reflect on the nature of the idolatry which it forbids. An idol is not just a representation of another god, thought it can be that. The grossest forms of idolatry in Scripture are those in which men have tried to worship the true God in a manner in which He has not commanded. When the Israelites at Sinai created a golden calf to worship, they did not understand it to be a new god, a replacement for the Lord. They proclaimed it to be the God who had delivered them from Egypt. Aaron built an altar before it and proclaimed a feast to the Lord (Ex 32:4-5). What made the golden calf idolatrous was not that it was a new god, but that it was an attempt to worship the true God in a manner of their own devising. The prohibition of carved altars makes it clear that the root problem is not the carving of a tangible token of the presence of God, but the fashioning of such a token without the express command of God. God did, after all, command the construction of a rather elaborate physical focal point for His worship, the tabernacle and later the temple, and the design included carved cherubim above a golden ark. But He reserved the right to determine what was appropriate and what was not. Any carving was to be done at His direction, not at the whim of the worshiper.

The question of what constitutes an idol is a difficult one, but when it comes to idols in worship, the example forbidding carved altars tells us most of what we need to know. A carved altar was an attempt to make the worship of God more pleasing to the senses. A carved altar is much easier to look at than is a block of stone. The point of this restriction was to teach the Israelites to keep their hands to themselves in matters of worship. Novelty, artistic license, and innovation were forbidden, no matter how reasonable or innocuous the additions might appear to the worshiper.

The second commandment does forbid the making of representations of God, but it does not forbid God Himself from doing so. Jesus Christ in His humanity was and is in fact “the exact representation of His nature” (Heb. 1:3). He is the perfect realization of the need which the Israelites felt for God to be present physically and to be manifested in a manner discernible to the human senses. This is a legitimate need. That is why, in the absence of Christ in bodily form, God has given us what Reformed theologians have called “the visible word” in the form of the sacraments. The Lord’s Supper and baptism are tangible promises of His physical return. The point of the second commandment is that, though God understands the need for a tangible, even visible, token of His presence in worship, He is the only one who can provide it; He will not tolerate attempts by fallen men to do what only He can do properly. Modern attempts at multiplying external ceremonies are in reality implicit denials of both the incarnation and the resurrection. They are attempts to provide temporary humanly devised replacements for the (supposed) absence of a physical manifestation of God’s presence.