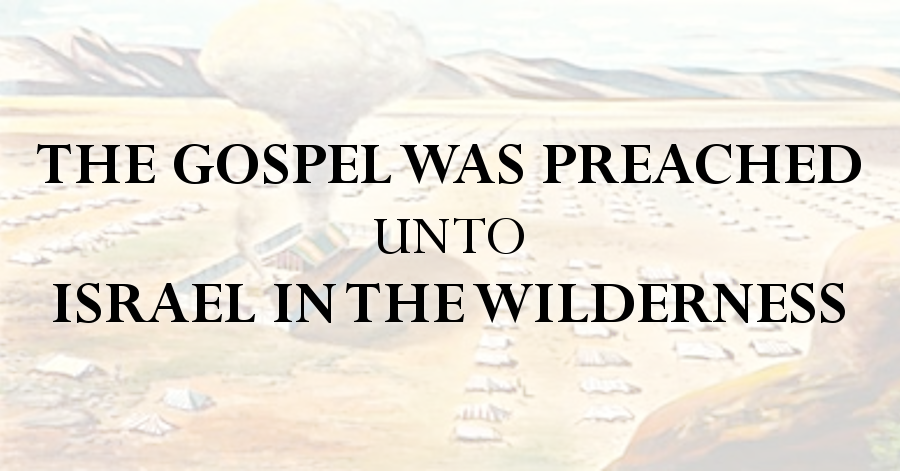 “For unto us was the gospel preached, as well as unto them: but the word preached did not profit them, not being mixed with faith in them that heard it.” Hebrews 4:2

It is supposed and granted that the gospel was preached unto the people in the wilderness. The apostle doth not here directly assert it; it is not his intention to prove it; it was not the design or subject-matter that he had in hand; nor would the confirmation of it have been subservient unto his present purpose. It is our privilege and duty, and not theirs, which he is in the immediate consideration of. But the matter being so indeed, a supposition of it, namely, that the gospel was preached unto them, was necessary to his purpose. How this was done we must now inquire; and concerning it we observe, —

(1.) That the promise made unto Abraham did contain the substance of the gospel It had in it the covenant of God in Christ, and was the confirmation of it, as our apostle disputes expressly, Galatians 3:16-17. He says that the promise unto Abraham and his seed did principally intend Christ, the promised seed, and that therein the covenant was confirmed of God in Christ. And thence it was attended with blessedness and justification in the pardon of sin, Romans 4; Galatians 3:14-15. So that it had in it the substance of the gospel, as hath been proved elsewhere.

(2.) This covenant, or promise made unto Abraham, was confirmed and established unto his seed, his posterity, as the Scripture everywhere testifieth. And hereby had they the substance of the gospel communicated unto them; therein were they “evangelized.”

(4.) With the spiritual part of the promise made unto Abraham there was mixed, or annexed unto it, a promise of the inheritance of the land of Canaan, Genesis 12:3; Genesis 12:7; and this, —

[1.] That it might instruct him and his seed in the nature of faith, to live in the expectation of that which is not theirs in possession, Hebrews 11:8-9.

[2.] That it might be a visible pledge of the love, power, and faithfulness of God in performing and accomplishing the spiritual and invisible part of the promise, or the gospel, in sending the blessing and blessed Seed to save and deliver from sin and death, and to give rest to the souls of them that do believe, Luke 1:72-75.

[3.] That it might be a place of rest for the church, wherein it might attend solemnly unto the observance of all those institutions of worship which were granted unto it or imposed upon it, to direct them unto the promise. Hence,

(5.) The declaration of the promise of entering into Canaan, and the rest of God therein, became in an especial manner the preaching of the gospel unto them, name]y, —

[1.] Because it was appointed to be the great visible pledge of the performance of the whole promise or covenant made with Abraham. The land itself and their possession of it was sacramental; for

[2.] It had in itself also a representation of that blessed spiritual rest which, in the accomplishment of the promise, was to be asserted.

[3.] Because by the land of Canaan, and the rest of God therein, not so much the place, country, or soil, was intended or considered, as the worship of God in his ordinances and institutions therein solemnly to be observed. And by these ordinances, or through faith in the use of them, they were led unto a participation of the benefits of the promise of the gospel.

From what hath been spoken it appears how the gospel was preached unto the fathers in the wilderness, or how they were evangelized. It is not a typical gospel, as some speak, that the apostle intends, nor yet a mere institution of types; but the gospel of Jesus Christ, as it was in the substance of it proposed unto them in the promise; the entering into the land of Canaan being the especial instance wherein their faith was to be tried.

The gospel is no new doctrine, no new law; it was preached unto the people of old.

The great prejudice against the gospel at its first preaching was, that it was generally esteemed to be καινὴ διδαχή, a “new doctrine,” Acts 17:19, — a matter never known before in the world. And so was the preaching of Christ himself charged to be, Mark 1:27. But we may say of the whole gospel what John says of the commandment of love. It is “a new commandment,” and it is “an old commandment which was from the beginning,” 1 John 2:7-8. In the preaching of the gospel by the Lord Jesus himself and his apostles, it was new in respect of the manner of its administration, with sundry circumstances of light, evidence, and power, wherewith it was accompanied. So it is in all ages, in respect of any fresh discovery of truth from the word, formerly hidden or eclipsed.

This, then, having been given out and established ἀπὸ καταβολῆς κόσμου, “from the very beginning of the world,” this was the rise of the gospel, which ever since hath been the ground, rule, and men-sure of all God’s transactions with the children of men. Whatever new declarations have been made of it, whatever means have been used to instruct men in it, yet the gospel was still the same throughout all times and ages. The Gentiles, therefore, had no true ground to object against the doctrine of it that it was new: for though, by the sin and unbelief of themselves and their forefathers, who had lost, despised, and totally rejected, the first revelation of it, it was new to them; yea, and God, in his just and righteous judgments, had hid it from them, and rendered it at length μυστήριον χρόνοις αἰωνίοις σεσιγημένον, Romans 16:25, — “a mystery,” the declaration whereof was “silenced from the past ages of the world,” or all the secula that had passed from the beginning; yet in itself it was not new, but the same that was revealed from the foundation of the world by God himself. And this is for the honor of the gospel; for it is a certain rule, “Quod antiquissimum, id verissimum,” — “That which is most ancient is most true.” Falsehood endeavors by all means to countenance itself from antiquity, and thereby gives testimony to this rule, that truth is most ancient. And this discovers the lewdness of that imagination, that there have been several ways, in several seasons, whereby men came to the knowledge and enjoyment of God. Some, they say, did so by the law, some by the light of nature, or the light within them, or by philosophy, which is the improvement of it. For God having from the “beginning,” from the “foundation of the world,” declared the gospel in the manner before proved, as the means whereby sinners might know him, live unto him, and be made partakers of him, shall we think that when this way of his was despised and rejected by men, he himself would do so also, and follow them in their ways, indeed their delusions, which they had chosen, in opposition to his truth and holiness? It is fond and blasphemous once so to imagine.

The Jews, with whom our apostle had to do peculiarly, derived their privileges from the giving of the law, and concluded that because the law was given unto them of God, according to the law they were to worship him, and by the law they were to be saved. How doth he convince them of their error and mistake in this matter? He doth it by letting them know that the covenant, or the promise of the gospel, was given unto them long before the law, so that whatever the end and use of the law were (which what they were he here declares), it did not, nor could disannul the promise; that is, take its work away, or erect a new way of justification and salvation. Galatians 3:17, “And this I say, that the covenant, that was confirmed before of God in Christ” (that is, the promise given unto Abraham, verse 16), “the law, which was four hundred and thirty years after, cannot disannul, that it should make the promise of none effect.” As if he had said, ‘God made a promise to Abraham, or made a covenant with him, whereby he was evangelized, and the way of life and salvation by Christ made known unto him. Now, if the end of the law was to justify sinners, to give them life and salvation, then the way of the promise and covenant instituted by God four hundred and thirty years before must be disannulled. But this the faithfulness and unchangeableness of God will not admit.’And the apostle insists only on the precedency mentioned, and not that priority which it had of the law of Moses, in that it was preached from the foundation of the worlds because dealing with the Jews, it was sufficient for him to evince that even in their relation unto God, and God’s especial dealings with them, the gospel had the precedency of the law. What, then, John the Baptist said of the Lord Christ and himself,

“He that cometh after me is preferred before me, for he was before me,” John 1:15

— though he came after him in his ministry, yet he was above him in dignity, because he had a pre-existence in his divine nature unto him, — the like in another sense may be said of the law and gospel as preached by Christ and his apostles Though it came after the law, yet it was preferred above it or before it, because it was before it. It was, in the substance and efficacy of it, revealed and declared long before the giving of the law, and therefore in all things was to be preferred before it.

It appears, then, that from first to last the gospel is, and ever was, the only way of coming unto God; and to think of any other way or means for that end, is both highly vain and exceedingly derogatory to the glory of God’s wisdom, faithfulness, and holiness.