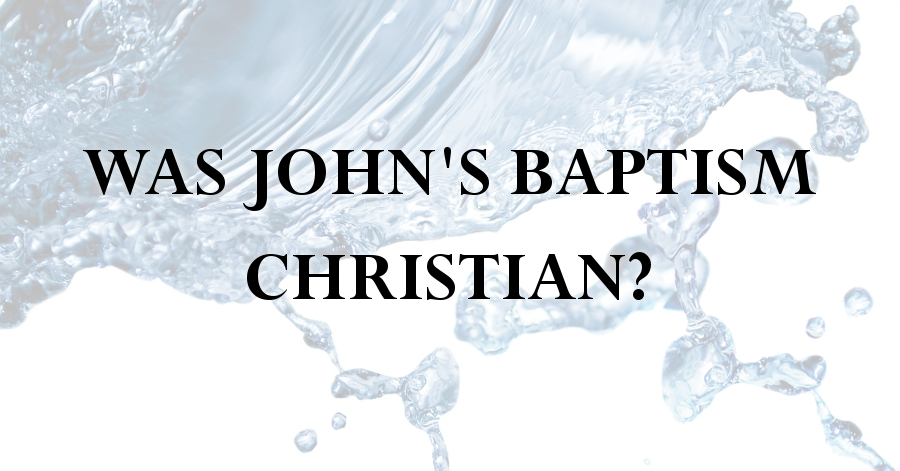 Many, citing Acts 19 as their proof, would deny that John the Baptist’s baptism was Christian. They conclude from that text that the Apostle Paul rebaptized men who had been baptized by John and therefore John’s baptism was not a valid New Testament baptism. However, we believe this understanding of Acts 19 is incorrect, and we affirm that John’s baptism was indeed Christian, as it is very evident that John preached Christ and was a Trinitarian. Two eminent theologians help us resolve any doubts about this and reach a proper understanding of Acts 19.

Thirdly, there is but one baptism in the New Testament. The baptism of John was a New Testament baptism, for he preached Christ who had already come (although He had not yet died) as “the Lamb of God, which taketh away the sin of the world” (John 1:29). And all the prophets and the law have prophesied until John. The baptism of John and of Christ are therefore one and the same.

Objection #1: A very clear distinction is made in Matt 3:11, for John baptized with water, and Christ with the Holy Ghost and with fire.

Answer (1) The baptism of the apostles is administered with water until this present day; by the same argument this would then also not be the baptism of Christ. The invalidity of this argument should be obvious to everyone.

(2) There is a distinction here between the external sign, which John could only administer, and the matter signified, which only Christ could give.

Objection #2: John did not baptize in the name of the Holy Trinity, which the apostles, however, did upon Christ’s command. It is therefore not one and the same baptism.

Answer (1) The doctrine of the Holy Trinity did not have as many opponents as is presently the case, and it was therefore not necessary to state this expressly each time. Not everything John said is recorded; from the fact that it is not recorded, one can therefore not conclude that it did not transpire.

(2) He had been sent by a triune God, and John knew Him who had sent him. Knowing Him, he also preached Him and therefore also baptized in His Name.

(3) The Holy Trinity revealed itself in the baptism of Christ (Matt 3:16-17). The Father spoke from heaven to the Son who was being baptized, and the Spirit of God descended.

(4) Nowhere is the baptism of John disqualified, which would have occurred if John had not baptized in the name of the Holy Trinity.

(5) Then Christ and all others would not have been baptized in the correct manner.

Objection #3: Those persons who were baptized by John were later rebaptized, as is to be observed in Acts 19:4-5, “Then said Paul, John verily baptized with the baptism of repentance, saying unto the people, that they should believe on Him which should come after him, that is, on Christ Jesus. When they heard this, they were baptized in the name of the Lord Jesus.”

Answer: This misunderstanding is a result of separating the words of verse 4 from those in verse 5, and by acknowledging the words of verse 4 to be the words of Paul, but deeming the words in verse 5 to be those of Luke, the writer of this history—as if he were recounting what followed upon the instruction of Paul. This, however, would have to be proven. These words integrate very well when one conjoins verses 4 and 5, and considers them to be the words of the apostle Paul. He instructed the disciples in verse 4 about the manner in which John baptized and taught, and thereupon declared that all who heard it were obedient and believed John’s preaching, were baptized by him.

(2) Even if one admits that these disciples who were baptized by John were rebaptized, it therefore does not follow that John’s baptism differed from the baptism of the apostles. Neither here nor elsewhere is this baptism disqualified. From this it could only be alleged that the disciples of John were baptized twice; this, however, is denied.

Then the point of contention remains whether or not one may be baptized twice. We maintain that this generally ought not to occur. There is no need for repetition since it is the sacrament of regeneration and incorporation into the church, which indeed only occurs but once. Moreover, an example of such repetition is lacking. (The Christian’s Reasonable Service Vol. 2, pp. 490-491)

Acts 19:4-5 does not prove that the Ephesian disciples, who had John’s baptism, were rebaptized by Paul. For the words “when they heard they were baptized” (akousantes de ebaptisthēsan, v. 5) are not the words of Luke narrating what followed Paul’s discourse to them, but rather a confirmation the Pauline oration to those Ephesians, by which he teaches that those who had received baptism from John, had been baptized in the name of Christ and so had no need of a new baptism. Thus Paul is introduced saying, “John verily baptized with the baptism of repentance, saying unto the people, that they should believe on him which should come after him [akousantes de for hoi de akousantes]; now they who heard him (to wit, John) were baptized in the name of Jesus” (viz., by John himself). Therefore this discourse of Paul instructed those to whom it is directed concerning the baptism which they had received, while in no way does it teach that they were rebaptized. Thus it is evident that the passage can be explained best from the force of the particles men and de, which, although they are often expletives and are used alone, still they never occur together in a composition without being adversatives. Unless, then, we wish to pull to pieces the discourse of Paul, we ought to confess that the words akousantes de are not the words of Luke, but of Paul addressing the Ephesians themselves. Luke continues the words of Paul in v. 6 and connects it with vv. 3 and 4 by the conjunction (viz., narrating that Paul, it being heard that they had been baptized by John, laid his hands upon them, as in Acts 8:14, 17). (Institutes of Elenctic Theology Vol. 3, p. 402)

For a positive case that the baptism of John was indeed Christian, confer this excerpt from William Attersoll, where he gives eight positive arguments and responds to an additional three objections:

William Attersoll’s Badges of Christianity (3) – The Baptism of John | ReasonableReligion.com