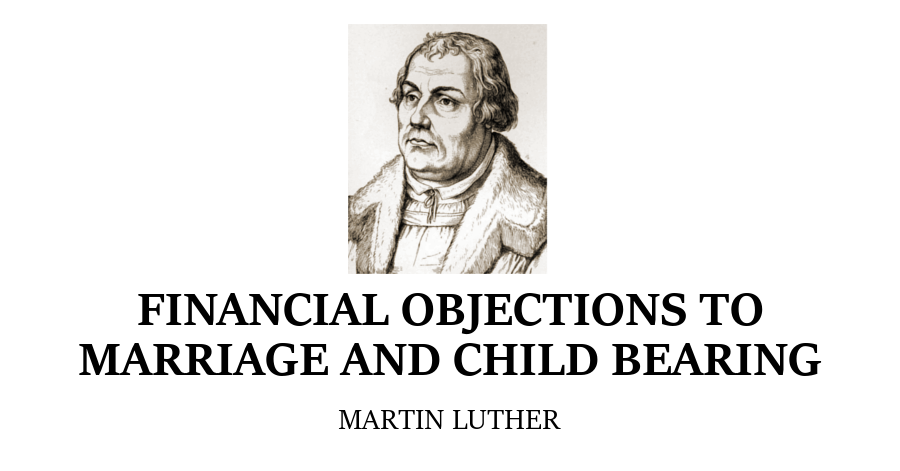 Finally, we have before us one big, strong objection to answer. Yes, they say, it would be a fine thing to be married, but how will I support myself? I have nothing; take a wife and live on that, etc. Undoubtedly, this is the greatest obstacle to marriage; it is this above all which prevents and breaks up marriage and is the chief excuse for fornication.

What shall I say to this objection? It shows lack of faith and doubt of God’s goodness and truth. It is therefore no wonder that where faith is lacking, nothing but fornication and all manner of misfortune follow. They are lacking in this, that they want to be sure first of their material resources, where they are to get their food, drink, and clothing [Matt. 6:31]. Yes, they want to pull their head out of the noose of Genesis 3:19, “In the sweat of thy face shalt thou eat bread.” They want to be lazy, greedy rascals who do not need to work. Therefore, they will get married only if they can get wives who are rich, beautiful, pious, kind, indeed, wait, we’ll have a picture of them drawn for you.

Let such heathen go their way; we will not argue with them. If they should be lucky enough to obtain such wives the marriages would still be un-Christian and without faith. They trust in God as long as they know that they do not need him, and that they are well supplied. He who would enter into wedlock as a Christian must not be ashamed of being poor and despised, and doing insignificant work. He should take satisfaction in this: first, that his status and occupation are pleasing to God; second, that God will most certainly provide for him if only he does his job to the best of his ability, and that, if he cannot be a squire or a prince, he is a manservant or a maidservant.

Indeed, God has shown sufficiently in the first chapter of Genesis how he provides for us. He first created and prepared all things in heaven and on earth, together with the beasts and all growing things, before he created man. Thereby he demonstrated how he has laid up for us at all times a sufficient store of food and clothing, even before we ask him for it. All we need to do is to work and avoid idleness; then we shall certainly be fed and clothed. But a pitiful unbelief refuses to admit this. The unbeliever sees, comprehends, and feels all the same that even if he worries himself to death over it, he can neither produce nor maintain a single grain of wheat in the field. He knows too that even though all his storehouses were full to overflowing, he could not make use of a single morsel or thread unless God sustains him in life and health and preserves to him his possessions. Yet this has no effect upon him.

To sum the matter up: whoever finds himself unsuited to the celibate life should see to it right away that he has something to do and to work at; then let him strike out in God’s name and get married. A young man should marry at the age of twenty at the latest, a young woman at fifteen to eighteen; that’s when they are still in good health and best suited for marriage. Let God worry about how they and their children are to be fed. God makes children; he will surely also feed them. Should he fail to exalt you and them here on earth, then take satisfaction in the fact that he has granted you a Christian marriage, and know that he will exalt you there; and be thankful to him for his gifts and favours.