Q. Do the precepts of the first table express the rights of God, which he demands shall be embodied in the civil constitutions of the nations, that their governments may be his ordinance?

Q. Can you give a simple exhibition of these rights or claims of God by the Mediator upon the nations of the earth?

A. Yes. 1. The first requires as an inalienable right of the Godhead, that every nation as such, in its organic character, acknowledge the Lord to be its God. “Thou shalt have no other Gods before me” (Ex. 20:3). “For thou shalt worship no other God, for the Lord whose name is jealous, is a jealous God” (Ex. 34:14). “Is he the God of the Jews only? is he not also of the Gentiles ? Yea, of the Gentiles also.” (Rom. 3:29).

2. The second precept requires the nation to establish the true worship of God, and to put down, and prevent idolatry or false worship. “Thou shalt not make unto thee any graven image,” &c. “Thou shalt not bow down thyself to them, nor serve them,” &c. (Ex. 20:4). “Thus shall ye deal with them; ye shall destroy their altars, and break down their images, and cut down their groves, and burn their graven images with fire.” (Deut. 7:5). See an example, by the king Hezekiah, 2 Kings 18:4-7. If idolatry and false worship is a moral evil, a violation of the law, then the ruler must suppress it (Rom. 13:4). See also 1 Cor. 10:19-21.

3. The third precept requires the nations to entertain an awful reverence of the holy name of Jehovah, and sincerely to respect everything whereby he maketh himself known. “Thou shalt not take the name of the Lord thy God in vain ; for the Lord will not hold him guiltless that taketh his name in vain” (Ex. 20:7). “If thou wilt not observe to do all the words of this law that are written in this book, that thou mayest fear this glorious and fearful name, the Lord thy God, then the Lord will make thy plagues wonderful,” &c. (Deut. 28:58-59). “For from the rising of the sun, even unto the going down of the same, my name shall be great among the gentiles (or nations) and in every place, incense shall be offered to my name, and a pure offering: for my name shall be great among the heathen (nations), saith the Lord of hosts,” (Mal. 1:11). See also Rom. 15:4; James 5:12; Zech. 5:3.

4. The fourth precept enforces the claims of God upon the nations to observe the Christian Sabbath: to consecrate it as a day of national rest and devotion. “Remember the Sabbath day to keep it holy,” etc. (Ex. 20:8). See also Jer. 17:20-22; Ex. 16:22-23; Num. 25:32-33; Neh. 13:15; Mark 2:27. Now, as God is as jealous of his deity today as of old, as his worship is as sacred, his name as holy, and his sabbath as honourable, it is the duty still of all nations “from the rising of the sun to the setting of the same,” to recognize these his rights, and embody them in their national constitutions, find, defend, and enforce them by their laws and administration.

Q. Can you give a summary enumeration of the several rights which the second table of the Decalogue, defines and guarantees to mankind?

A. Yes. The first precept of this table is designed to preserve subordination in society by regulating the mutual duties of superiors and inferiors.

1. It maintains parental authority, which is one of the main pillars of society, whilst it secures, on the other hand, the rights of the child, who is to be honoured as a rational and immortal being, and not the abject slave of a domestic tyrant.

2. It regulates the relation of master and servant, secures obedience to the former, and the “rendering of that which is just and equal” to the latter (Col. 4:1). It does not elect the former into a lordly and irresponsible tyrant, with the scourge for his sceptre, and to reduce the latter into the grovelling condition of the brutalized slave. There is no such relation recognized by the law of God. The master is the head of the family, and the servant is as the son, subordinate to the head of the domestic establishment, amid the labourer is worthy of his hire. “Woe unto him that buildeth his house by unrighteousness, and his chambers by wrong; that uses his neighbour’s service without wages, and giveth him not for his work” (Jer. 22:13).

3. It regulates the relation of husband and wife, minister and flock, and secures their reciprocal rights, as expounded elsewhere in the Scriptures.

4. Civil government, also, has its security under the aegis of this precept. It guarantees obedience to legitimate rulers administering the ordinance of God, and secures the rights of the subject, as those of the son. It presents the civil ruler as a benignant parent, and all the people surrounding him as his beloved children, whom he nourishes and cherishes as a father his son.

5. In one word, the second table guarantees to all equally the preservation of life, chastity, property, reputation, and is designed even to suppress the lustings of the depraved heart after that which is the possession of another.

6. It is true that civil government cannot reach the heart. It regulates the life. Yet it is ordained of God not only to punish overt acts in violation of any of the precepts, but to prevent crime by precautionary regulations, and a parental surveillance. As an illustration – it is the duty of civil government, for the preservation of chastity, secured by the 7th commandment to suppress the houses of temptation, and to protect society against the wiles and obscenity of “the strange women, whose house is the way to hell” (Prov. 7:27); and on the other hand to protect woman from the lust of licentious and debased men, who prowl around the loveliest, that they may seize them as their prey.

7. Thus with regard to every other precept of the Decalogue, civil government is its guardian, and is bound to apply it equally to all the subject, of its sceptre, not only to punish the transgressor, but to enforce its observance by such regulations as will bring the precept to bear upon the minds and consciences and lives of all under its jurisdiction.

Q. Is not civil government bound, as it is God’s ordinance, to execute the penal statute, enacted its sanctions and enforcements of the precepts of the Decalogue?

A. This seems to be a necessary deduction from the principles established. Because,

1. Those particular judgments which were enacted for the defence and enforcement of the moral laws are, from the nature of the case, of perpetual obligation, for the penal sanction of a law is a part of the law itself. Take away the sanction, and the law is annulled.

2. They were the punishments decreed of God for crimes committed in violation of his own law, and he knows best what punishment is due to its transgression.

3. The moral law is of universal and perpetual obligation, its penal sanctions must carry with them a tantamount obligation.

4. They were enacted for the defence of the authority of the Decalogue, which is ever to be defended, the defence should perpetually surround the law.

5. The nature of crime is invariably the same, no lapse of time destroys its punishable character; hence, like crimes in every age deserve like punishment, as they attack the authority of God the Lawgiver, and subvert the good order, purity, and peace of society with equal malignancy.

7. 1 Tim. 1:8-10, which see, powerfully enforces this argument. It is evidently the penal law to which the Apostle refers, because elsewhere he affirms that believers, the same with the righteous, are under the law to Christ. The righteous man is not liable to the judgment of the penal law, but the transgressor of the moral law is exposed to its sanctions. The law, as it is preceptive, is a rule of life to the righteous, and he delights in it after the inner man. The penal law applies only to the wicked, “murderers,” &c. The sanctions of the law, then, are of equal obligation with the law itself.

8. Other judicial enactments are recognized by Paul as yet binding in their principle as a moral rule. “For it is written in the law of Moses. Thou shalt not muzzle the mouth of the ox that treadeth out the corn. Doth God take care for oxen? Or saith he it altogether for our sakes, no doubt, it is written: that he that plougheth should plough in hope; and that he that thresheth in hope, should be partaker of his hope” (1 Cor. 9:9-10).

[Excerpt from Section VII of the Reformed Presbyterian Catechism (1853).] 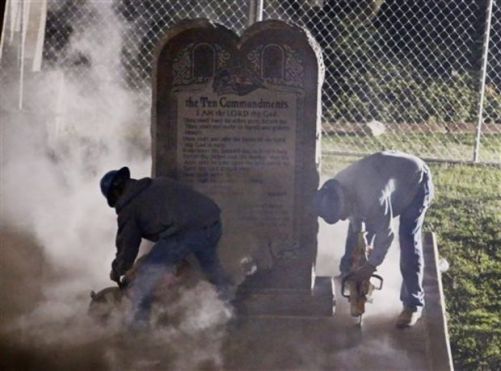