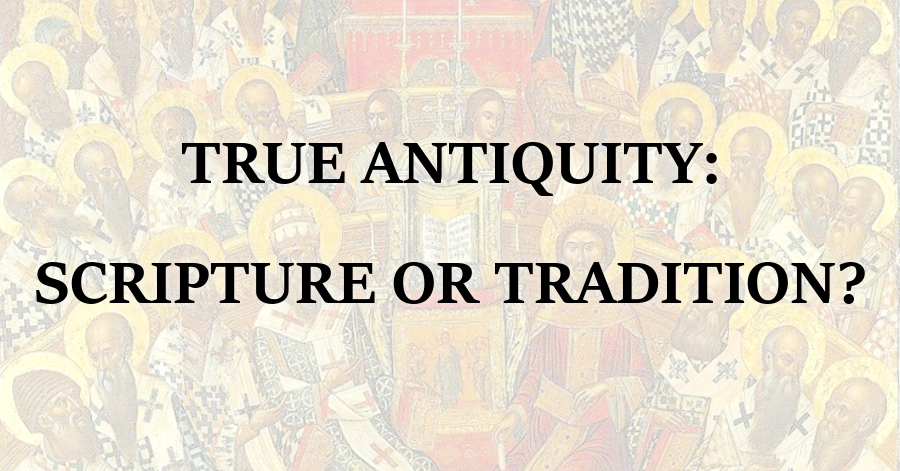 John Cameron
An Examination Of Those Plausible Appearances
Which Seem Most To Commend The Romish Church
ch. 17.

The only means to prove true antiquity is to have recourse to the beginning by the Scripture.

So then, in respect of this antiquity, do we not submit ourselves to reason when we yield that our doctrine should be rejected if it be not of the Apostles? Are not our proofs authentic to confirm the antiquity of our religion, when they are gathered out of their writings, the writings of the Prophets and Evangelists?

The course which is taken, to prove the antiquity so much talked of in the Church of Rome, is a recourse to Fathers, and Councils. The more ancient these Fathers and Councils are, prove they not this antiquity the more evidently? But what Fathers, what Councils are more ancient, than the Scripture? what antiquity then, is ancienter than the Scriptures? what title more ancient than that which is of the same date with the Scriptures? Certainly it is an excess of open blasphemy, to equalize either Fathers or Councils to Scripture, and yet this is done. But though this be done, yet it will not be said that the Scripture is of a fresher original than the Fathers, and Councils, impudence has not yet ventured so far. He then of whose side is the doctrine of the Scripture, has gained the prerogative of antiquity, and by consequent of truth. So then this question about antiquity is brought to this issue, what we are to examine which is the doctrine most consonant to Scripture, this being cleared, the controversy of antiquity need to trouble us no longer.

It is impossible otherwise to decide it: for let them allege Fathers, and Councils, as long as they will, this scruple still remains, to know if the Apostles have so ordained. Universal consent cannot be called to witness in this case, for to show that, it would be requisite to ask all persons of all ages, until the Apostles. If the name of universal consent, be attributed to that which is believed by the greater part, to the most received opinion, yet how shall we know and judge of this kind of universal agreement? Must it be by Councils? Provincial Councils cannot give us sufficient assurance of it, and for general let them show us that after that at Jerusalem which is registered in the Scripture, there was any one held before that of Nice, which was not celebrated until about the year 325, shall it be by the writings of the Fathers which lived before this Council? The greatest part, yea and most ancient of them had this strange conceit, that we are to expect after the resurrection, an earthly happiness here below, for the space of 1000 years, during which the Lord also shall converse with us eating, and drinking. A doctrine which those Fathers propose as received of all the Church. The Fathers then are not sufficient witnesses, the consent of the Church is not a sufficient testimony of true antiquity. But what shall we say of their consent in receiving little children to the Eucharist? Shall we therefore believe this opinion to be ancient? Ancient indeed in respect of us, but not of truth, which being truly ancient and Apostolic, has condemned it of error, which doubtless will be confessed by the Church of Rome. They which came after these ancients, have corrected their errors, concerning the thousand years habitation upon earth, the worldly delights after the resurrection, the admission of children to the Communion. Their coming afterward, has not prejudiced the priority of truth, which they set up again in her ancient splendour and majesty. The time which these fathers lived before them, advantaged not their opinions younger than truth.

It is then a reasonable offer which we make, to verify the antiquity of our religion by the Scripture. It is an easy, necessary, and certain discovery. For how few are there to be found, which either are versed in antiquity, or can be? Seeing the tedious succession of so many ages, the multitude of volumes which must be read, and perused for this purpose. A multitude, if we have regard to the truth of the history we search, defective; if to the leisure of ability of the greater sort infinity. Let them which have been versed in these enquiries speak, if they find not through every age changes, and alterations? But the Scripture is exposed to the view of every one; it is but one book in which that which is necessary to salvation is easy to him, who is not preoccupied either with passion, or with a conceit of its obscurity. This we have elsewhere demonstrated, here we will only recite as appertaining to the matter we have in hand, that which the renowned father Chrysostom speaks concerning this.

“The Pagan saith, I would make myself a Christian, but I know not which side to fasten on. There are many contentions among you, every one saith, I speak the truth. I know not unto what, or whom to refer myself: both sides pretend Scripture. But answer him, this makes much for us: for if we should say that we believe reasons, there would be something to trouble one, but seeing that we stand to the Scriptures seeing they are plain, and true, it is very easy to judge of the matter. If any one consent unto them he is a Christian: if he oppose them, he is far from their company.”

These are the very words of that father, which in his mouth will find a great deal more favour, and less envy than in ours. Words which advertise us, that the Scripture is the most especial instrument to have recourse to, in the search either of antiquity, or truth. Words also, which avouch that the Pagan himself, say judge who is he that believes, who speaks agreeably to Scripture: although he cannot judge of the truth contained in it. For they are very different things to judge of the truth of a writing, and of the conformity of some discourse to it. The Pagans could not judge of the truth of the Scripture, but according to Chrysostom, they might discern, what tenet and opinion was most conformable to it. Now this suffices in the question of antiquity: for neither side doubles, but that the Scripture is most ancient, that since then which shall be found most conformable to it, shall be the most ancient. The Pagans may judge of this conformity, saith Chrysostom, how much rather then may the Christians. The shortest cut then to the composing of this difference, is to address ourselves to the Scripture.

When one would know the antiquity of the privileges of a college, or a society, he repairs nowhere, but to the charter of the foundation. The instrument of the foundation of the Church is the Scripture: if we offer to verify our antiquity, if we do verify it by the date of this instrument: we proceed ingeniously, and our conclusion is irresistible. Let them cease then to reproach us, that we have brought in a new doctrine, unknown in the times of the Apostles. Let them not for shame boast any longer of antiquity, seeing they refuse to be controlled by the Scripture, the most ancient monument of antiquity. Certainly they make but an untoward enquiry into antiquity, who measure it by a certain number of years: who dream that to have been always extant, whose beginning they are ignorant of.

It is a safer course then, to prove antiquity by truth, then truth by antiquity. “Custom without truth,” as St. Cyprian well observed, “is but antiquity of error.” The proportion, elaborate figure, the beauty of a medal, statue, or an old piece of building is not known by the antiquity, but the antiquity of them is characterized by these conditions as by its infallible marks. So the glory and use of the Sun, are not discerned by his antiquity, but by his glory and use, he may be judged to be as old as heaven and earth. It is not with time in respect of truth, as it is in respect of nobility, the antiquity of which augments its reverence, making it more illustrious. Time contributes no growth, nor luster to truth. She was as much herself, in her cradle, as she is many centuries of years after. We must believe that the thing is, and afterward examine since what time it began to be. Let us prove our religion to be true: and afterward let us consider its antiquity: yea by this means we shall have proved it; for virtue is ancienter then vice, truth than lies, superstition is after religion as sickness after health. So we are ready to verify both the antiquity of our religion, by its truth, and the truth of it by its antiquity: beginning at the well-head, the times of the Patriarchs, Prophets and Apostles; that the process may be abridged, and speedily ended.