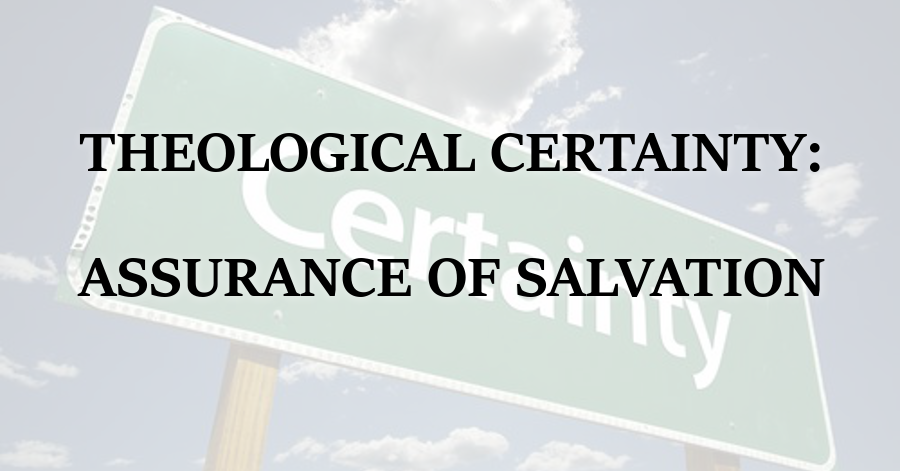 Can Christians have assurance of salvation? The Westminster Confession (18:1) states “such as truly believe in the Lord Jesus, and love him in sincerity, endeavoring to walk in all good conscience before him, may in this life be certainly assured that they are in a state of grace, and may rejoice in the hope of the glory of God, which hope shall never make them ashamed.“

To better understand this assurance believers may have, we need to briefly consider the three kinds of certainty.

“There is a certainty of science or knowledge, and that is either of first principles which are assented unto by all without any discourse or debate at all, or else of such conclusions as are deduced from those principles.”

“Mathematical (or metaphysical) [certainty]  is that which belongs to first principles known by nature of themselves and to conclusions demonstrated by principles of this kind (as when the whole is said to be greater than any of its parts and that the same thing cannot both exist and not exist at the same time).”

“There is a certainty of sense, such as Thomas desired to have by putting his fingers into Christ’s wounds (John 20:25); and this, Philosophers say, is infallible about its proper object, if there be no defect or impediment in the sensitive faculty.”

“Lastly, There is a certainty arising from the authority of those who do declare or witness such things. For the testimony of him whom I believe to be the supreme truth and infallible about such or such things doth beget a firm and sure persuasion that they are true.”

Now this authority is two-fold, either human or divine.

“Either human; and as the men who witness are for number few or less, or for quality more or less worthy of credit, so more or less is that certainty; and this breeds a human faith, or moral certainty only (now it is much to be feared that the greatest part of Protestants even in matters of Religion, have no more than this human faith, believing upon no higher a motive than human tradition, or the authority of man).”

“Moral certainty accompanies those truths which cannot indeed be demonstrated, but yet persuade by such marks and probable arguments that a sensible man cannot doubt them (as that the Aeneid was written by Virgil and the History of Livy by Livy). For although the thing does not carry its own evidence with it, yet it has been attended with such a constant testimony that no one, having a knowledge of things and of letters, can doubt it.”

“Or else it is Divine, from God’s authority and revelation, and this begets an undoubted assent, which cannot be over-mastered by any contrary temptation. Hence it is that this certainty of faith is above all certainty of sense or reason, because the ground of it is more firm and immutable; and although the nature of things believed be far above our understandings (as in the doctrine of the Trinity and incarnation of Christ) yet the testimony of them is clear and evident, so that the certainty of faith may not be called obscure (as Papists term it), but clear and evident. For that is true which Aquinas saith, No man believeth that which he doth not see to be credible, and therefore in everything believed there is evidentia credibilitatis, a clearness and evidence of the grounds why I do believe, though there be not always evidentia rei, a clearness of the thing assented to.”

“Theological certainty attends those things, which although they cannot be demonstrated or known of themselves and by nature, are nevertheless founded not only upon probable grounds and moral arguments, but upon truly theological and divine (viz., upon divine revelation). Therefore, this gives them not merely a moral and conjectural certainty, but a truly divine faith.”

By way of application, Turretin explains that we may have certainty in the truths of Scripture because of its divine authority.

“The Scriptures do not possess metaphysical certainty; otherwise the assent which we give to them would bespeak knowledge, not faith. Neither do they possess simply a moral and probable certainty; otherwise our faith would not be more certain than any historical assent given to human writings. But they have a theological and infallible certainty, which cannot possibly deceive the true believer illuminated by the Spirit of God.”

The illumination of the Holy Spirit, “bearing witness by and with the Word in our hearts,” also gives the believer experiential certainty “of the infallible truth and divine authority” of the Bible (WCF 1:5).

“But continue thou in the things which thou hast learned and hast been assured of, knowing of whom thou hast learned them; And that from a child thou hast known the holy scriptures, which are able to make thee wise unto salvation through faith which is in Christ Jesus” (2 Timothy 3:14-15).

Assurance of Salvation is a Mixed Certainty.

“Now if you ask, to what kind of certainty is that reduced which the people of God have about their being in Christ and in the state of grace, I answer: It is a mixed or compounded certainty, partly a certainty of faith, and partly of sense and in experience, which sense is spiritual, and wrought by the Spirit of God in us, so that it doth far transcend probable conjectures and moral persuasions arising in us, because of such bodily affections or dispositions of joy and grief, which we sometimes find in ourselves, and hypocrites also are many times made partakers thereof.”

Likewise, Westminster Confession 18:2 denies that the assurance of salvation is grounded on human authority, and affirms that it is grounded on divine authority and the inward, experiential testimony of the Holy Spirit.

This can be seen through a threefold schema of causality.

The Word of God itself is the formal cause of one’s infallible assurance of salvation if he does “truly believe in Christ, and endeavor to walk in all good conscience before him” (WLC Q. 80), if one has genuinely “fled for refuge to lay hold upon the hope set before us” (Heb. 6:18).

“Wherein God, willing more abundantly to shew unto the heirs of promise the immutability of his counsel, confirmed it by an oath: That by two immutable things, in which it was impossible for God to lie, we might have a strong consolation, who have fled for refuge to lay hold upon the hope set before us” (Hebrews 6:17-18).

But this assurance can only be theoretical and abstract until the Holy Spirit applies it to the believer personally, and enables the Christian to know that he is indeed “in the estate of grace and shall persevere therein unto salvation” (WLC Q. 80).

The testimony of “the Spirit of adoption” is the efficient cause “witnessing with our spirits that we are the children of God” and “whereby we cry, Abba, Father” (Rom 8:15-16).

Lastly, the reflex act of the soul, whereby the Christian is enabled to look back into himself and discern God’s grace at work within, is the instrumental cause used by the Holy Spirit to infallibly assure the believer that he is in Christ. [1]

The Westminster Larger Catechism brings all of this together in a simple and thorough way:

Q. 80. Can true believers be infallibly assured that they are in the estate of grace, and that they shall persevere therein unto salvation?

Q. 81. Are all true believers at all times assured of their present being in the estate of grace, and that they shall be saved?

c.f. The Authority of Scripture and the Testimony of the Church

How We Know the Bible is the Word of God

[1] “The soul of a man being a rational and spiritual substance, hath two kinds of acts. There are first the direct acts of the soul, whereby it is carried out immediately and directly to some object. And there are secondly reflex acts, whereby the soul considers and takes notice of what acts it doth. It’s as if the eye were turned inward to see itself. The Apostle John expresseth it fully, “We know that we know“ (1 John 2:3). So that when we believe in God, that is a direct act of the soul; when we repent of sin because God is dishonoured, that is a direct act; but when we know that we do believe, and that we do repent, this is a reflex act.” (Burgess, Spiritual Refining, Sermon 116, p. 671).