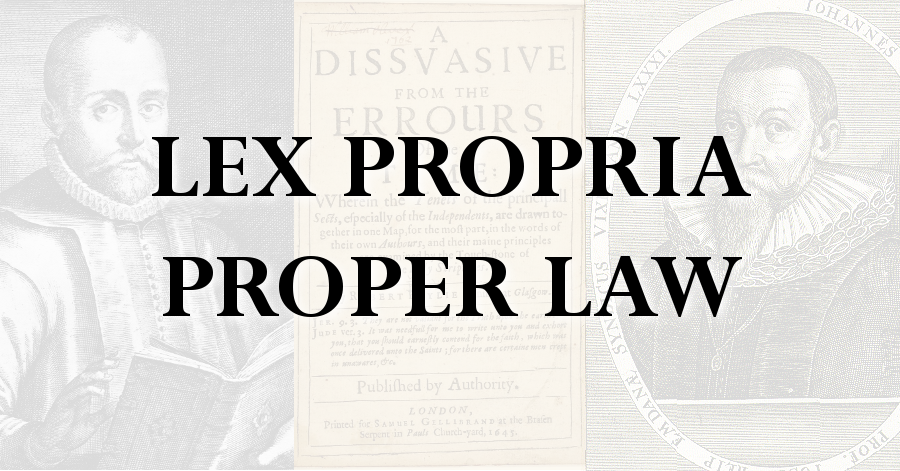 The judicial law of Israel, the laws whose subject matter concerned Israel as a civil body, is expired with the state of that people and is no longer binding except for its general equity (WCF 19:4). “Proper law” (lex propria) recognizes the authority of magistrates to make positive human laws based upon the moral law of God “according to the nature, utility, condition, and other special circumstances of his country” (Althusius, Politica, ch 21). It is applying the moral law (which is written on the human heart and evident through the light of nature, but held in unrighteousness cf. Romans 1:18; 2:14-15) and the general equity of the judicial law to particular circumstances of modern nations.

The essential goal of civil government (upholding the moral law) is the same at all times and in all places, but the means differ in form according to the circumstances of each society. That which was sufficient to promote the good and restrain the evil (Romans 13:3-4) in ancient agrarian societies is going to be different in form than what is needed in technologically advanced and urban societies. Circumstances do not change the moral law of God, and proper law does not give license to magistrates to go beyond the moral law or the lex talionis, but when circumstances change, prudent magistrates must apply the moral law to their particular circumstances even when those circumstances are not directly addressed in the Word of God. Since men suppress the truth of God’s Law written on their hearts and in nature, without proper law everyone would do what is right in his own eyes and would not be curbed by the civil use of the Law (Judges 17:6).

A Survey of Proper Law in Reformed Civil Ethics.

The Confession of Saxony succinctly defines proper law in this way:

“We teach that ‘it doth belong to the authority and duty of the magistrate to forbid and (if need be) to punish such sins as are committed against the Ten Commandments, or the law natural;‘ as likewise ‘to add unto the law natural some other laws, defining the circumstances of the Natural Law, and to keep and maintain the same by punishing the transgressors.‘”

Scottish Commissioner to the Westminster Assembly Robert Baillie points out the error of rejecting the magistrate’s legislative power:

“They spoil kings and parliaments of their legislative power.

“But their great tenent about the magistracie is this, that no prince nor state on the earth hath any legislative power; that neither king nor parliament can make any law in any thing that concerns either church or state; that God alone is the law-giver; that the greatest magistrate hath no other power, but to execute the Laws of God set down in Scripture; that the judicial Law of Moses bindes at this day all the nations of the world as well as ever it did the Jews: They tell us that whatever God in Scripture hath left free, it may not be bound by any human Law, whether civil or ecclesiastike; and what God hath bound by any law in Scripture, they will not have it loosed by the hand of any man.”

A Dissuasive From the Errours of the Time, p. 31.

Johannes Althusius, the great Calvinist political philosopher and federalist of the 17th century, also explains what is called lex propria, or jus proprium, the proper law; which is positive human law based upon the moral law of God applied to particular circumstances of a given nation. Althusius explains proper law and then gives two reasons why it is necessary:

“Proper law (lex propria) is the law that is drawn up and established by the magistrate on the basis of common law (lex communis) and according to the nature, utility, condition, and other special circumstances of his country. It indicates the peculiar way, means, and manner by which this natural equity among men can be upheld, observed, and cultivated in any given commonwealth. Therefore, proper law (jus proprium) is nothing other than the practice of this common natural law (jus naturale) as adapted to a particular polity. It indicates how individual citizens of a given commonwealth are able to seek and attain this natural equity. Whence it is called the servant and handmaiden of common law (jus commune), and a teacher leading us to the observance of common law.

“Proper law is established for two principal reasons, as Zanchius says. The first reason is that not all men have sufficient natural capacity that they are able to draw from these general principles of common law the particular conclusions and laws suitable to the nature and condition of an activity and its circumstances. The second reason is that natural law is not so completely written on the hearts of men that it is sufficiently efficacious in restraining men from evil and impelling them to good. This is because it merely teaches, inclines, and accuses men. It is therefore necessary that there be a proper law by which men who are led neither by the love of virtue nor by the hatred of vice may be restrained by the fear of punishment that this law assigns to transgressions of common law. In this sense, it is said that ‘law is set forth not for the just, but the unjust‘.”

George Gillespie also noted that “other judicial or forensical laws concerning the punishments of sins against the moral law may, yea, must be allowed of in Christian Republics and Kingdoms; provided always, they are not contrary or contradictory to God’s own judicial laws” (Wholesome Severity Reconciled With Christian Liberty).

“It is in the law of God, that all our deputed authority to command others, or to bind ourselves is allotted to us. The requirement of moral duties by the law of God obligeth us to use all lawful means to promote the performance of them; and hence requires human laws and self-engagements, and the observance of them as conducive to it. Nay they are also expressly required in his law, as his ordinances for helping and hedging us in to our duty. In making lawful vows, as well as in making human laws, we exert the deputed authority of God, the supreme Lawgiver, granted to us in his law, in the manner which his law prescribes, and in obedience to its prescription… Whoever doth not, in his attempts to obey human laws or to fulfill self-engagements, consider them as having that binding force which the law of God allows them, he pours contempt on them, as ordinances of God, and on the law of God for allowing them a binding force. Thus, through maintaining the superadded but subordinate obligation of human laws, and of self-engagements to moral duties, we do not make void, but establish the obligation of God’s law.”

John Brown of Haddington, The Absurdity and Perfidity of All Authoritative Toleration of Gross Heresy, Blasphemy, Idolatry, and Popery, p. 101-103.

William Perkins in A Discourse of Conscience (pages 61-64), likewise elucidates on the legislative power of magistrates concerning things “indifferent” but that are wholesome and “are agreeable to God’s word, serve for the common good, stand with good order, and hinder not the libertie of conscience.”

“Wholesome laws of men, made of things indifferent, binde conscience by virtue of the general commandment of God, which ordaineth the Magistrates authoritie: so as whosoever shall wittingly & willingly, with a disloyal mind, either breake or omit such laws, is guiltie of sinne before God.

“By wholesome lawes, I understand such positive constitutions, as are not against the law of God, and withall tend to maintaine the peaceable estate and common good of men.

“Furthermore I adde this clause, made of things indifferent, to note the peculiar manner whereof humane lawes properly intreat: namely such things as are neither expressely commanded or forbidden by God.

“Now such kinde of lawes have no virtue or power in themselves to constraine conscience, but they bind onely by virtue of an higher commandment. Let every soule be subject to the higher powers, Rom. 13.1. Or, honour father and mother, Exod. 20. Which commandments binde us in conscience to performe obedience to the good laws of men. As S. Peter saith, submit yourselves to every humane ordinance for the Lord, 1 Pet. 2.13. that is, for conscience of God, as he saith afterward, v.19. whereby he signifieth two things: first that God hath ordained the authority of the gouernours: secondly that he hath appointed in his word, and thereby bound men in conscience to obey their governours lawfull commands.”

Perkins goes on to explain other laws that are not indifferent, but are good in themselves, “intreating of things that are morally good, and the parts of God’s worshippe, are the same with God’s laws: and therefore binde conscience.” Not because they are enacted by men, but because they are God’s laws and morally binding on all men. Thus, breaking these laws is sinful in two ways, first because it would be violating God’s most holy moral law that the conscience ought to be bound and ruled by, and secondly because it would be disobeying the lawful authority of the civil magistrate to govern (which comes from the secondary laws of nature derived from the 5th commandment (cf. Rutherford, Lex Rex, Question 2)).

Next, Perkins moves on to civil laws made by magistrates that are directly contradictory to the Law of God. These laws do not bind the conscience and the magistrate has no authority to enact them. Peter and John refused to obey unlawful commands (Acts 4:19) as well as Shadrach, Meschach, and Abednego (Daniel 3). “Moreover, in that man’s law binds onely by power of God’s law, hence it follows, that God’s law alone hath this priviledge, that the breach of it should be a sinne.”

“It is all that the lawes of God doe or can doe, to binde conscience simply and absolutely. Therefore human laws bind not simply, but so farre forth as they are agreeable to God’s word, serve for the common good, stand with good order, and hinder not the libertie of conscience.”
(ibid., 64).

It is important to interject here and point out that Perkins does not understand “liberty of conscience” the same way that it is commonly understood today. For just a few paragraphs before, he states that civil laws which “prescribe the worship of God, standing in the practice of true religion & virtue, of this kind are all positive lawes touching articles of faith & the duties of the moral law” are within the purview of the civil magistrate to enforce. So “the pretended liberty of conscience” to worship God in any way that we please, is clearly not what Perkins has in mind here.

Thus we see that classic Reformed theologians did not believe magistrates were restricted to the letter of the Law, rather, they believed that magistrates have the legislative power to adapt God’s moral law, Natural Law, to their particular polity and context “so farre forth as they are agreeable to God’s word, serve for the common good, stand with good order, and hinder not the libertie of conscience” and “tend to maintaine the peaceable estate and common good of men.” Neither did they believe that the first table of the Law was outside the power of the Christian civil government to enforce.